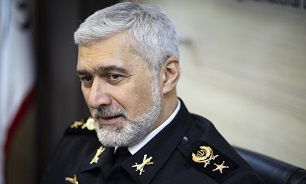 Speaking on the sidelines of the 21st International Maritime & Offshore Technologies Exhibition on Qeshm Island on Thursday, Rear Admiral Amir Rastegari said, “Last week, the Islamic Republic held an unprecedented joint naval drill with maritime powers in the northern parts of the Indian Ocean that, in fact, showed the military might of the Iranian armed forces.”

Referring to the considerable feedbacks of the exercise at both regional and international levels, the military chief said the joint maneuver was the beginning of a broader future cooperation between the three powerful countries.

He noted that last week’s drill was also a great opportunity to showcase Iran’s naval might and self-sufficiency.

“Despite 40 years of sanctions and unjust pressures, we have managed to reach self-sufficiency in supplying the naval defense equipment,” he said, adding that “all the vessels and weaponry used in the maneuver were domestically-produced.”

Iran, Russia and China held a joint naval from Friday to Sunday (December 27-29, 2018) in the Sea of Oman and the Indian Ocean with the aim of promoting the security of international trade in the strategic regions, as well as sharing experience among participants against piracy and marine terrorism.

The drills came amid the United States’ efforts to set up a so-called international maritime coalition in the Persian Gulf following a series of suspicious attacks on passing takers in the waterway it blamed on Iran.