Malice, stupidity of US terrorist forces to further strengthen tree of resistance in region 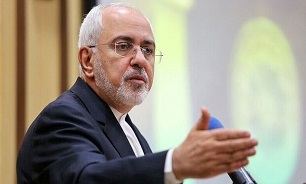 "Among the believers are men true to what they promised Allah. Among them is he who has fulfilled his vow [to the death], and among them is he who awaits [his chance]. And they did not alter [the terms of their commitment] by any alteration," reads the statement as reported by the Foreign Ministry website.

He expressed disgust at and strongly condemned the American forces’ terrorist and criminal move to martyr the honored commander of the army of Islam, IRGC Quds Force Commander Major General Qassem Soleimani.

“The malice and stupidity of American terrorist forces who assassinated General Soleimani, a hero martyr and a commander of the fight against terrorism and extremism, will undoubtedly further strengthen the tree of resistance in the region and the world,” Zarif said in the statement.

“The Foreign Ministry of the Islamic Republic of Iran will tap into all its political, legal, and international capacities to implement the decisions made by the Supreme National Security Council in order to hold the criminal and terrorist regime of the US accountable for this blatant crime,” he added.

Issuing a statement IRGC announced that the Iranian commander was martyred in a US airstrike early morning today.

The strike also martyred Abu Mahdi al-Muhandis, the deputy commander of Iraqi Popular Mobilization Forces (PMU) and some of the other forces of the PMU along with their guests.