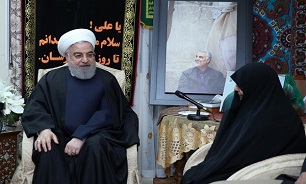 “The Americans were not aware of the big mistake they made; they will face the consequences of their crime, not only today but also in the coming years,” Rouhani said Saturday while paying a visit to the family of the martyred commander.

The president underlined the great role of General Soleimani in the fight against terrorists in the region, saying, “His services on the path of bringing peace and security to Iran and the region, especially to the people of Iraq, Syria, Yemen, Lebanon and Afghanistan, will never be forgotten.”

“Although people are aware of every aspect of his selfless efforts, General Soleimani’s valuable measures and great achievements should be revealed to all,” Rouhani added.

He noted that General Soleimani was not only a great military commander but also a unique politician and deft strategist, adding that the US’ beastly move only raised the Iranian and Iraqi nations’ hatred of Washington officials.