General Soleimani’s Revenge Not to End by Shooting Few Missiles 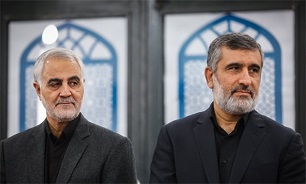 “Martry Soleimani’s revenge will not end by launching four missiles or targeting a US military base or even by killing Trump; I mean none of these have the same value as the blood of this martyr,” Brigadier General Hajizadeh told reporters on Monday before the start of the funeral ceremony of Lieutenant General Soleimani in Tehran.

He reiterated that attacking the US bases in the region cannot compensate the blood of the General Soleimani.

“The only thing that can compensate the blood of this martyr is the complete destruction of America in the region,” General Hajizadeh added.

The senior military commander’s remarks came as millions of Iranians had unprecedentedly gathered in Tehran to commemorate their General who was assassinated by US terrorist forces in Iraq on Friday morning.

Iran has vowed ‘hard revenge’ in ‘due time and right place’ over Washington’s act of terror.

In relevant remarks earlier on Monday, new Commander of the IRGC Qods Force Brigadier General Esmayeel Qaani underlined that the US should wait for Tehran's reprisal after assassination of Lieutenant General Qassem Soleimani.

“The revenge for Soleimani’s martyrdom is a promise given by God, as the God is the main avenger,” Brigadier General Qaani said, addressing the funeral procession of late General Soleimani.

Brigadier General Qaani said that “we promise to continue Martyr Soleimani’s path with the same strength and his martyrdom will be reciprocated in several steps by removing the US from the region”.

He underlined that the continuance of this movement is to reach the global governance of Imam Mahdi (May God Hasten His Reappearance).