TEHRAN (defapress) – Reports suggest that the US Administration has delivered a draft of possible sanctions against Iraq to the Iraqi President Barham Salih.
News ID: 79822 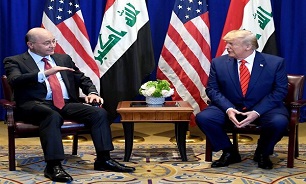 The draft aims to clarify the consequences of sanctions for the Iraqi government, a source told Skynews.

US President Donald Trump has threatened Iraq with imposing ‘very big sanctions’ if the Iraqi parliament follows through its nonbinding resolution to oust American forces from its soil.

“We will charge them sanctions like they’ve never seen before, ever. It’ll make Iranian sanctions look somewhat tame,” Trump tweeted.

In an extraordinary session on Sunday, the Iraqi parliament voted for a resolution requiring the government to order the withdrawal of US troops from Iraq.

The Parliament’s decision comes as US terrorist forces assassinated Iran’s Gen. Soleimani and Iraq’s deputy MPU al-Muhandis on Friday airstrikes at the order of Trump himself.