Attack on US Base Was Act of Self-Defense, Iran’s UN Envoy Says

TEHRAN (defapress) – Iran’s ambassador to the United Nations said the recent Iranian missile attack on a US military base in Iraq was in conformity with the right of self-defense.
News ID: 79850 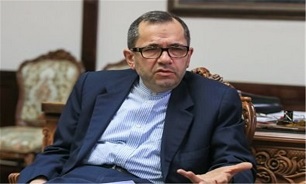 In a letter to UN Secretary-General Antonio Guterres and the president of the UN Security Council, Iranian ambassador Majid Takht Ravanchi said the Iranian missile strike on the US airbase in Iraq was carried out in compliance with the right of self-defense.

In a later meeting with Guterres, he also expounded on Iran’s stances on the US’ “provocative and cowardly” move to assassinate top Iranian commander Lt. General Qassem Soleimani, saying Tehran is prepared for dialogue and cooperation with regional countries to ease the tensions.

Paying tribute to the late Iranian commander as a hero of the war against terrorism and the Daesh (ISIS) terrorist group, Takht Ravanchi said the presence of five million people in the funeral of Lt. General Soleimani in Tehran and other Iranian cities, as well as in Iraq, reveals the American “miscalculation” in the assassination of the popular commander.

The ambassador also denounced the US’ refusal to grant Iranian Foreign Minister Mohammad Javad Zarif a visa for a UN meeting as a “clear violation of an agreement between the United Nations and the US,” calling on Guterres to take action against the brazen violation of international laws and agreements.