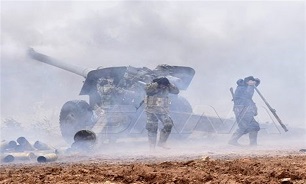 Syrian Arab News Agency (SANA) reported that a group of terrorists took advantage of foggy weather conditions and started shelling Syrian military points in the surroundings of Samaka and al-Barsa villages and the city of Ma’arat al-Numan in southern Idlib province before starting their attack.

The militants faced with a crushing response from the army forces and got two of their military vehicles destroyed by the army’s heavy defensive fire that managed to kill and injure a number of the terrorists, the report added.

Since mid-December, the Syrian army has been clearing Idlib of terrorist groups, including Daesh (ISIS or ISIL) and Tahrir al-Sham. Earlier in the week, the Syrian troops entered the town of Jarjanaz, which is located 10 kilometers (6.2 miles) east of Maarrat al-Numan, a major stronghold of militants in the southern part of Idlib.

Under a deal reached following a meeting between Turkish President Recep Tayyip Erdogan and his Russian counterpart Vladimir Putin in September 2018, all militants should have withdrawn from the demilitarization zone by October 15 that year.

On August 5, 2019,  the Syrian army declared in a statement the start of an offensive against foreign-sponsored militants in Idlib after those positioned in the de-escalation zone failed to honor a ceasefire brokered by Russia and Turkey and continued to target civilian neighborhoods.