TEHRAN (defapress)- Chief of Staff of the Iranian Armed Forces Major General Mohammad Baqeri underlined his country's preparedness to respond to any aggressive move, but meantime expressed the hope that tensions and conflicts in the region would stop by the US forces' pull-out.
News ID: 79903 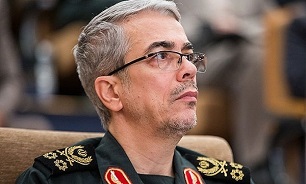 "The Islamic Republic of Iran is not interested in spreading tensions, but it will give a crushing response to any unwise and aggressive move and we hope that all disorders and conflicts will be uprooted by the US withdrawal from the region," General Baqeri said in a phone conversation with Turkish Defense Minister Hulusi Akar on Thursday.

He added that the US assassination of IRGC Quds Force Commander Lieutenant Qassem Soleimani and its attacks against Hashd al-Shaabi bases in Iraq and certain bases in Syria created a new round of tensions in the region, noting that Iran's retaliatory missile strikes against the US bases in Iraq showed them Tehran's determination to defend itself and give a more crushing response in case of continued mischiefs.

Akar, for his part, called for joint efforts to maintain regional stability and prevent the terrorists from using the opportunity of heightened tensions.