TEHRAN (defapress) – Iranian President Hassan Rouhani slammed the US’ sanctions against the country, noting that these pressures will not make Iran abandon its plans and dreams for development.
News ID: 80035 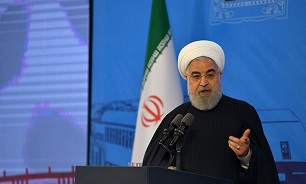 “We didn’t think that a cunning and terrorist-sponsor administration would come to power in America and put more pressure on Iran, the region, the world and its allies more than any other US administration in history,” Rouhani said on Tuesday in the inauguration ceremony of the second phase of Tehran's 7th water treatment plant in Pakdasht county.

Rouhani said it is true that sanctions have caused difficulties in the process of fulfilling his administration’s plans for developing the country, “but we will not abandon our hopes and dreams and will continue our tireless efforts for people’s welfare and prosperity and promoting justice.”

The US, under the Trump administration, has imposed unilateral sanctions on Iran’s economy after withdrawing from the Joint Comprehensive Plan of Action (JCPOA) in May 2018. Washington hopes for a better deal with Tehran but Iran has always highlighted that there will be no negotiations until unfair sanctions are removed and Washington fulfills its commitments under the UN-endorsed JCPOA.

Elsewhere in his remarks, Rouhani stressed the need to obtain power. “We think that power is useful against America and oppressors; no, it is also useful when interacting with friends, neighbors, and brothers. If you are not powerful, even a small neighboring country would bully you.”