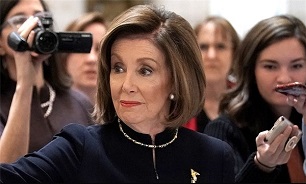 “The Trump Administration’s expansion of its outrageous, un-American travel ban threatens our security, our values and the rule of law. The sweeping rule, barring more than 350 million individuals from predominantly African nations from traveling to the United States, is discrimination disguised as policy,” Pelosi said in a statement, The Hill reported.

“With this latest callous decision, the president has doubled down on his cruelty and further undermined our global leadership, our Constitution and our proud heritage as a nation of immigrants,” she added.

The statement comes after the Trump administration announced it would restrict the ability of immigrants from Nigeria, Myanmar, Eritrea, Kyrgyzstan, Sudan and Tanzania to get certain immigration visas. The new policy does not amount to a blanket travel ban.

"Because we have higher confidence that these six countries will be able to make improvements in their system in a reasonable period of time, we did not feel it would be proportionate to impose restrictions on all immigrant and non-immigration visas," a DHS official stated, citing national security concerns as the reason for the restrictions.

Trump implemented the first version of the travel ban just over three years ago against several Muslim-majority nations. A revised version of that ban was later upheld by the Supreme Court, and travel from Iran, Libya, Syria, Somalia and Yemen is still restricted.

The administration separately curtailed travel from North Korea and Venezuela.

The first iteration of the ban sparked chaos at national airports and protests across the country, with protesters calling the policy racist.

"President Trump’s security and travel proclamations have immeasurably improved our national security, substantially raised the global standard for information-sharing, and dramatically strengthened the integrity of the United States’ immigration system," she said, adding, "The orders have been a tremendous and vital success."

Pelosi noted that Democrats would oppose the new policy in court and introduce the NO BAN Act to “prohibit religious discrimination in our immigration system and limit the President’s ability to impose such biased and bigoted restrictions”.

“In the Congress and in the Courts, House Democrats will continue to oppose the Administration’s dangerous anti-immigrant agenda,” she said, adding, “We will never allow hatred or bigotry to define our nation or destroy our values.”

The proclamation signed by the president will go into effect February 22.