TEHRAN (defapress) – Deputy Coordinator of the Islamic Republic of Iran’s Army, Rear Admiral Habibollah Sayyari expressed the country’s readiness to boost cooperation with the armies of the friend countries in the defensive sector.
News ID: 80102 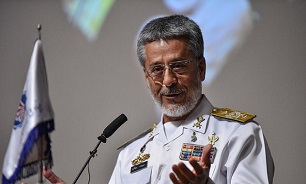 “The Islamic Republic of Iran’s armed forces are ready to expand their ties with the armies of other countries in the defensive sector,” Rear Admiral Sayyari said on Monday while addressing a ceremony to commemorate the 41st anniversary of the Islamic Revolution, attended by foreign attaches.

He added, “The Iranian Army has managed to maintain its high level of readiness in the past decades by reaching self-sufficiency in the production and application of domestic equipment.”

The top commander referred to the presence of non-regional elements that have fomented the insecurity in the region, adding, “Today, the world, especially our region, is facing multiple security challenges.”

He criticized some countries for following the “culture of unilateralism and negligence toward international treaties, stressing that “the only way to solve such problems is the comprehensive cooperation of all countries.”