TEHRAN (defapress) – US Democratic presidential hopeful Pete Buttigieg maintained his slim lead in the Iowa caucuses after the second round of results from the Monday night contest was released.
News ID: 80119 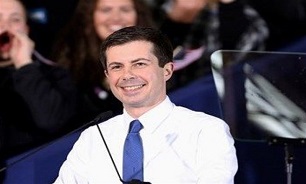 The results, which accounted for roughly 71 percent of the precincts that voted, showed the former South Bend, Ind., mayor with 26.8 percent of the delegate share. Sen. Bernie Sanders (I-Vt.) nipped at his heels with 25.2 percent.

The Iowa Democratic Party earlier Tuesday released results for 62 percent of precincts, showing Buttigieg and Sanders in the lead. With the substantial number of precincts left to count and the margin so slim, the race remains too close to call.

Despite no official winner being declared, Buttigieg has already declared himself the victor as he works to gin up support heading into the New Hampshire primary next week.

“So we don’t know all the numbers, but we know this much: a campaign that started a year ago with four staff members, no name recognition, no money, just a big idea, a campaign that some said should have no business even making this attempt, has taken its place at the front of this race to replace the current president with a better vision for the future,” he said at a campaign stop Tuesday, The Hill reported.

Sanders’s camp also expressed confidence that it would ultimately come out of Iowa with a top-tier showing, casting itself as the winner as well.

“We want to thank the people of Iowa. We are gratified that in the partial data released so far it’s clear that in the first and second round more people voted for Bernie than any other candidate in the field,” said Sanders senior adviser Jeff Weaver.

Sanders won over more supporters in the caucuses, according to the existing tallies, but a combination of geographic distribution and a realignment process that gives someone who supports a nonviable candidate a second chance to influence the process meant Buttigieg won a higher share of the delegate vote released so far.

The results released thus far also flashed a warning sign for Biden, who had campaigned heavily on his electability but trailed both Buttigieg and Sanders by roughly 10 points.

The Iowa Democratic Party is expected to continue rolling out more results on Wednesday after a breakdown on a new app meant to speed up reporting instead caused inconsistencies and sparked confusion on Monday, leading to the delayed results.