Iranian students coming from Wuhan not affected by Coronavirus

TEHRAN(defapress) – Iranian Minister of Health Saeed Namaki Iranian students airlifted from Wuhan to Iran have been negative to contamination as per the tests taken from them at quarantine.
News ID: 80145 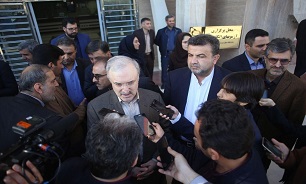 Speaking to reporters, Namaki said that the suspected Chinese passengers were also undergone test procedure and the results were negative.

He added that none of the 100 suspected people in different Iranian provinces were also affected by Coronavirus.

The Chinese officials announced on Saturday that the death toll of Coronavirus epidemic reached 722 people in China.

The National Health Commission of the People's Republic of China has allocated 60 billion Yuan ($8.7b) for fighting coronavirus.

Elsewhere in his remarks, Iranian minister referred to importing about $3b drugs and medical equipment during the current Iranian calendar year (to end on March 20), saying they were imported through channels that we had earlier.

Namaki reiterated that despite US strict sanctions on drugs and medical equipment, we could import drugs.

Thanks to these imports, lack of drugs in Iran decreased to one third of the same period last year.

In spite of propaganda campaign promoted by US for drug exports to Iran, Americans are still conducting sabotage.

We have also supplied the required drugs through our links.

Commenting on Swiss Humanitarian Trade Arrangement (SHTA), Namaki said it is still in testing phase and has had no success yet.

US plays no role in designing SHTA and it was done by Switzerland, he said adding that we will welcome the plan if it will be able to solve our problems.

"Swiss Humanitarian Trade Arrangement (SHTA), a payment mechanism to enable humanitarian goods to be delivered to Iran, is about to be implemented," Swiss embassy in Tehran earlier said.

The aim of the Swiss Humanitarian Trade Arrangement (SHTA) is to ensure that exporters and trading companies in the food, pharmaceutical and medical sectors based in Switzerland have a secure payment channel with a Swiss bank through which payments for their exports to Iran are guaranteed. In this way, Switzerland is helping to supply the Iranian population with agricultural commodities, food, medicines, and medical equipment. This is in keeping with Switzerland’s humanitarian tradition.

The SHTA was developed by Switzerland in close cooperation with the relevant authorities in the USA and Iran, as well as with selected Swiss banks and companies. Under the SHTA, the US Department of the Treasury will provide the banks involved with the necessary assurances that the financial transactions can be processed in accordance with the US legislation.