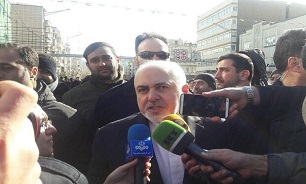 “Our people and regional people have shown in the past 40 days – since the martyrdom of General Soleimani – that the US is abhorred for the terror attack,” Zarif said while participating in the public rallies on Tuesday, marking the 41st anniversary of the Islamic Revolution’s victory.

The foreign minister added that US President Donald Trump’s move once again showed that the US has been clinging to a wrong stance against the Islamic Revolution in the past 41 years.

Zarif stressed that Trump is still making the same mistake, which has made the Iranian people unanimously stand against the move.

He added that the enemies have failed to truly know the people of Iran even after 41 years. "That is why they think that the Iranian people will stop supporting the Islamic Revolution if they keep with their pressures."

The 41st anniversary of the Islamic Revolution coincides with the 40th day of General Soleimani's martyrdom. Every year on this day, the nation turns out in droves to highlight support for the Revolution which replaced the US-backed regime with the Islamic Republic.