TEHRAN (defapress) – Secretary of Iran’s Guardian Council (GC) Ayatollah Ahmad Jannati highlighted the importance of the upcoming elections in the country and made assurances that the council will never allow the people’s votes to be manipulated.
News ID: 80196 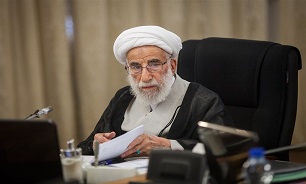 “The elections on February 21 are very important because the enemies want (the people to) boycott the elections and reduce the turnout,” Ayatollah Jannati said, addressing a meeting of the GC in Tehran on Wednesday.

He further emphasized that all the Iranian people and officials should make their efforts to increase the turnout and disappoint the enemy.

“If the turnout is high and competent and efficient candidates are elected by the people, we will witness the formation of a strong parliament and this will increase national solidarity and solve the people's problems,” the cleric added.

He also made assurances that the Guardian Council will safeguard the elections’ health and that no one would be allowed to manipulate the votes.

Iran is going to hold the parliamentary and Assembly of Experts elections on February 21.