TEHRAN (defapress) – Russian President Vladimir Putin said the ouster of prime minister and a cabinet reshuffle that caught many in the country off guard in January was not in fact unexpected.
News ID: 80277 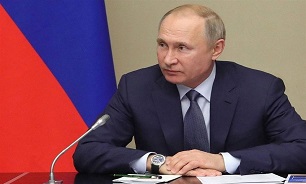 In an interview to the state-run TASS news agency, the first episode of which was released on Thursday, Putin said there was “nothing unusual or unexpected” about the dismissal of the government.

“You can of course ask me if I did say there would be no change, no plans for that. Yes, I did. If I had said that I was going to change the government tomorrow, all work would have just stopped dead the day after tomorrow,” Putin said, AP reported.

The reshuffle came just hours after Putin announced a constitutional reform during his annual state of the nation address on Jan. 15.

Among others, Putin dismissed Dmitry Medvedev, his longtime ally, who has been the country's prime minister since 2012. Medvedev, who succeeded Putin as president in 2008, agreed not to run for a second term in 2011 to make way for Putin, eliciting public outrage that later translated into the mass protests of 2011-2012.

In the Thursday interview, Putin said he discussed the reshuffle with Medvedev in advance, as they have an “open, comradely, friendly” relationship. “We don't keep secrets from each other. So we discussed it,” the president said.

Asked about why he decided to dismiss the cabinet that was appointed in 2018, Putin said that the government “has really done a lot,” but he felt that “people with modern training and commitment to achieving the overarching goal on key development elements” were needed in the cabinet.

He refused to say when he made the decision and who else, besides him and Medvedev, knew about it.