TEHRAN (defapress) – Spokesman for Iran’s Guardian Council Abbasali Kadkhodaei shrugged off the recent US sanctions against the members of the council, saying it is an honor to be blacklisted by the enemies of the Iranian nation.
News ID: 80282 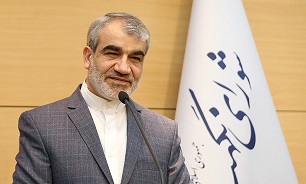 Speaking to reporters on Friday, Kadkhodaei said the latest decision from the US administration to impose sanctions against five members of the Guardian Council is not anything new to the Islamic Republic, since the US has shown hostility towards and made threats against the Iranian nation over the past 41 years and has always received a response.

He also described the US sanctions on the Guardian Council members as an “emblem of honor”, stressing that people of Iran will give a strong response to the US hostility with their huge turnout in the Friday’s election.

Kadkhodaei underlined that the Guardian Council members have been by no means irritated at the new US sanctions, saying they are delighted to receive such medal of honor from the archenemies of Iran.

His comments came after US President Donald Trump’s administration on Thursday announced sanctions against five Iranian officials in the Guardian Council.

The sanctions were announced a day before Iran’s parliamentary election.

The Guardian Council is a constitutionally mandated 12-member council in Iran that, among other things, is tasked with ensuring the compatibility of the legislation passed by the parliament with the criteria of Islam and the Constitution.