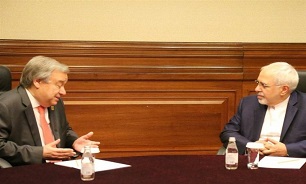 Zarif and Secretary-General of the United Nations Antonio Guterres held a telephone conversation on Friday evening.

The top Iranian diplomat and the UN secretary-general talked about the latest developments in Afghanistan.

Last month, UN Secretary-General's Special Representative for Afghanistan Tadamichi Yamamoto praised Iran for its contribution to the settlement of the Afghan problems.

In a meeting with Zarif in Tehran on January 28, Yamamoto expounded on the latest internal developments in Afghanistan, highlighted the Islamic Republic of Iran’s support for the Afghan government and nation throughout the years of war in that country, and lauded Iran’s positive role in helping resolve the problems of Afghanistan.

Zarif also voiced Iran’s support for the process of peace under the aegis and guidance of the Afghan government until reaching an intra-Afghan agreement with the participation of all Afghan groups, including the Taliban.