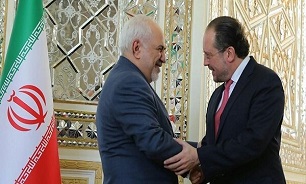 The two sides welcomed the development of good bilateral relations, emphasizing deepening and development in all fields. The latest developments on JCPOA, the European parties' commitments to JCPOA have been the main topics of discussion between Zarif and Schallenberg.

Zarif also held talks with his Dutch counterpart Stef Blok on Saturday in Tehran on the expansion of bilateral relations, the latest regional developments including, JCPOA and INSTEX, as well as the situation in Syria, Iraq, and Yemen.

Iranian Foreign Ministry Spokesman Seyyed Abbas Mousavi said late on Wed. that the foreign ministers of the Netherlands and Austria will visit Iran in the beginning of the next week.

In addition to reviewing bilateral ties and exchanging views with regards to the most important international issues, Islamic Republic of Iran’s criticism of Europe failure to live up to its commitments within the framework of the Joint Comprehensive Plan of Action (JCPOA) and their inaction with regards to the imposition of US extraterritorial laws will be emphasized in the talks with foreign ministers of the two forementioned European countries, Mousavi added.

Also, the issue that security of the Persian Gulf and Strait of Hormuz will be materialized only through the cooperation and interactions of countries in the region will also be stressed in the talks, Foreign Ministry Spokesman Mousavi continued.