TEHRAN (defapress) – In the face of the coronavirus outbreak, SWISS International Airlines has extended its flight suspension to China and added Iran and Italy to the list of countries with no or limited service.
News ID: 80405 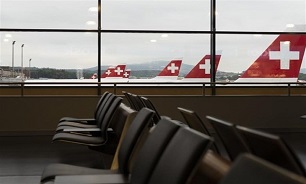 Recently, SWISS announced that for the safety of passengers and flight crew it was further suspending flights to and from Beijing and Shanghai until April 24, Swissinfo reported.

This follows the announcement in February that the suspension on flights to Mainland China would be suspended until March 28.

This was a decision taken by the parent company, Lufthansa Group, and applies to several airlines including Lufthansa and Austrian Airlines. The Lufthansa Group also suspended flights from Munich to Hong Kong between March 6 and April 24. Some connections are also cancelled on the routes from Frankfurt and Munich to Seoul.

New restrictions have also been put in place for other destinations that have seen an outbreak of Covid-19 infections in the last couple of weeks. Connections to Tehran have been suspended until April 30, according to Keystone-SDA.

The airline group also announced on Friday that, owing to changed demand, it was cutting back on flights to northern Italy, specifically Florence, Milan, Rome and Venice, which includes 28 flights a week.

According to the airline websiteexternal link, passengers whose flights were cancelled can re-book free of charge or receive a refund of their ticket. Free re-booking is also available for several destinations in northern Italy. Further restrictions on short and long-haul flights are being considered.

The airline also advises any passengers traveling to other destinations to check local requirements as some governments have restricted entry for people who have travelled to China. In some cases, this applies to passengers with a Chinese passport.

SWISS spokesperson Karin Müller told Keystone-SDA that she did not want to give figures on how bookings have fallen recently. "As a matter of principle, we do not communicate concrete figures about this." According to Müller, more information is expected to be shared during the SWISS annual media conference on March 19.

Swiss Economics Minister Guy Parmelin will convene a crisis summit on the coronavirus later this week. This is an opportunity for industry to share their concerns and requests on the economic impacts of the outbreak.