TEHRAN (defapress) – Saudi crown prince Mohammed Bin Salman reportedly plans to announce himself as the new king before the G20 Summit which is due to be held in November in Riyadh.
News ID: 80454 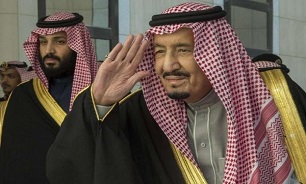 Crown Prince Mohammed bin Salman launched a purge against his chief royal rival, his uncle Prince Ahmed bin Abdelaziz, because he intends to become king before the G20 summit in Riyadh in November, sources briefed about the plans have told Middle East Eye.

Bin Salman, known as MBS, will not wait for his father King Salman to die because his father's presence gives legitimacy to the son, and he wants to use the summit in November as the stage for his accession to the throne.

Instead, MBS will force his father, who suffers from dementia but is in otherwise good health, to abdicate, the sources said.

MBS had ordered the detention of at least 4 members of the Royal family on Friday, while other reports indicate dozens of arrests. Observers believed that the detentions could not be unrelated to the dire health condition Saudi King Salam bin Abdulaziz, however, over the weekend pictures were released of King Salman greeting ambassadors, to disprove rumours sparked by the purge that the king had died.