TEHRAN (defapress) – President Rouhani said Sat. that no other country has been able to battle the outbreak of the novel coronavirus the way Iran has while under the most severe sanctions and maximum pressure imposed by the US.
News ID: 80508 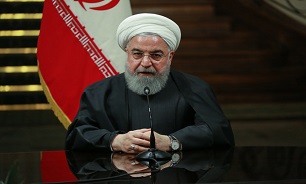 “No other country has been able to battle the widespread outbreak of the coronavirus the way Iran has while being under sanctions and maximum pressure,” President Rouhani said in a meeting on Saturday.

“The capabilities and measures taken by the government in fighting the coronavirus in the face of the US’ maximum pressure and the inhuman impacts of the sanctions are already remarkable even when compared with the measures taken by other countries,” the president added.

“All countries in the world are currently battling with the virus, but our situation is different from theirs,” Rouhani said, adding “despite all these differences, the fact of the matter is that all measures we have taken so far are adequate.”

Meanwhile, Iranian Foreign Minister Mohammad Javad Zarif has sent a letter to the head of the United Nations, urging the body to disregard the US sanctions on Tehran amid the coronavirus outbreak.

“As the #COVID19 ravages Iran, we should recognize that viruses don't discriminate. To fight them, neither should humans,” Zarif said in a tweet on Friday.

Iran is one of the countries severely affected by the COVID-19 pandemic with 11,364 infections and 514 deaths as of Friday.

“While the virus ravages our cities and towns, our population – unlike those of other countries affected – suffer under the most severe and indiscriminate campaign of economic terrorism in history, imposed illegally and extra-territorially by the Government of United States since it reneged on its commitments under Security Council Resolution 2231 in May 2018,” Zarif has noted in his letter to the UN Secretary-General Antonio Guterres.