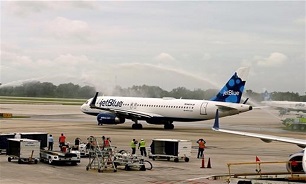 American Airlines said it would reduce all international capacity by 75 %.

“This suspension will last through May 6,“ the carrier said. “This change is in response to decreased demand and changes to US government travel restrictions due to coronavirus.”

It also said domestic service would be reduced by 20 % in April compared to last year, AFP reported.

Its competitor Delta said it would “significantly reduce its US to Europe flying beginning Monday, March 16, following the US government directive restricting travel between the US and Europe.”

Southwest Airlines said it “will likely make service reductions based on demand.”

The restrictions on travel from Europe took effect at midnight Friday and were later extended to Britain and Ireland as of Tuesday.