TEHRAN (defapress) – President Hassan Rouhani announced at the beginning of the new Iranian year that the status of the country’s strategic reserve is better than all previous years, stressing that Iranians will overcome the coronavirus outbreak with unity, cooperation and rapport.
News ID: 80559 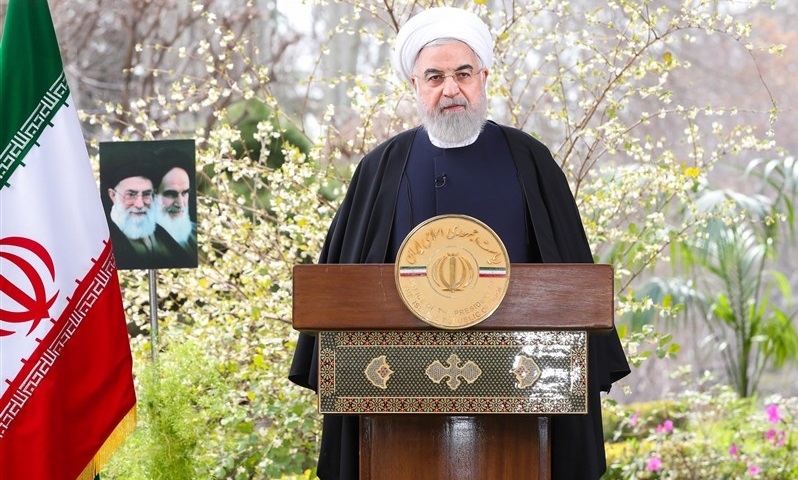 In a televised speech on Friday morning, President Rouhani congratulated the Iranian nation on Nowruz and the beginning of the year 1399, emphasizing that “unity, integrity and ethics” will create a bright future for the country.

What follows is the text of his speech, released by the president’s official website:

“In the name of Allah, the Most Beneficent, the Most Merciful

Congratulations on the arrival of Nowruz to the entire Iranians throughout the country and overseas, and also those in the region who celebrate Nowruz.

I would like to congratulate the New Year to all doctors, nurses and medical staff who are now beside our dear patients, especially those who have been infected with the virus.

The year that passed was the year of incidents and epic points in history. The biggest incidents of our history happened and the proudest epic points were made in the history by our brave people.

With floods rare to the history of Iran in the beginning of last year, 25 provinces across the country caused many problems for our people.

This flood made 35 trillion tomans of damage and destroyed more than 68,000 houses and 80,000 houses were in need of repair. During the year, most of the houses that needed to be rebuilt were reconstructed and all houses and buildings were mended and infrastructure was built.

Great hardships and sadness were imposed on our people, but our nation remained steadfast in the flood, and then the next month, the most severe sanctions of history was imposed on our nation by global terrorists.

Our oil industry was under the toughest historical sanctions and the pressure was on our economy from every side. They thought that with such intense pressure, our people would surrender, but our great nation resisted these hardships and created a new point in history.

They thought they would drive our country to a critical point in inflation and stagnation, but all the figures tell us that in the 9 months of 1398, our economic growth has been positive and inflation has been contained as much as possible.

In the same year, the biggest economic projects of our country in recent decades were inaugurated; from huge refineries to different dams to the revival of the agricultural sector, to the great transformation in oil and gas and to the opening of the largest highways, roads and railways and ports.

What can be regarded as the fruit of recent technology was shot down by our air defense missiles at our southern border, proving that this nation is the creator of the greatest points in the history of our country.

The system that downed the drone was 100% Iranian. Our air defense displayed its victory against modern American technology to the entire world.

It did not take long for the United States to commit the cruelest assassination of history against our great commander, who was the commander of fighting terrorism.

But our people and the nations of the region responded so strongly that they made it a great opportunity for resistance at the regional level. The funeral that happened in Baghdad, Karbala and Najaf, Ahwaz, Tehran, Mashhad, Qom, Kerman and all the Iranian people showed to the world that the Iranian nation is a grateful nation.

Our warriors shattered their house of cards by showering one of their largest bases in the region with rockets. The slap was so strong that the United States is still unwilling to report its real casualties.

Along with so many bitter and sweet incidents, we witnessed the unbelievable error of one person, which resulted in the loss of 176 dear ones, mostly our fellow Iranians, who were victim of the incident.

At the end of the year, we encountered a destructive uninvited guest, not just us but also more than 150 countries and nations. Coronavirus put the lives and health of people in risk and even business, but our doctors, nurses, hospitals and health centers came to the stage so bravely.

Here I would like to point out one important point, that over the past six years the government has invested in two special things, both in health and Healthcare Reform Plan and the cyberspace and communications and the National Information Network, the positive effects of which can be felt better today.

Today, the disease appeared when our hospital beds have doubled for the past 6 years and our hospital equipment is better than ever. Today, we need cyberspace and the best infrastructure for the information network that has been set over the past six years. But what's more dangerous than coronavirus, which is a disease that affects the body, is the mental illness we have to fight against.

Who would have believed that in this difficult conditions and in this disease, some would want to play with the soul and health of the people, to speak in the real and cyber-space to harass the souls of the people.

We will overcome the physical coronavirus fast with unity, effort, cooperation, and the efforts of doctors; we must try to overcome the coronavirus of the soul. It is unity, solidarity and ethics that can build a good future for us.

Here I would like to tell our dear people that year 1399 will be the year of major projects, the year of prosperity with the help of all people in the economy, and the year of change in people's lives and our economic relations with the world and our interactions with our neighbors.

Yet despite all the pressures in the year 1398, we have been able to be part of a major regional economic pact, the Eurasian Economic Union.

These are happy moments for our dear and honorable people, we will pray more in the year 1399. We will raise our hands higher to the sky. He is the Healer, we ask Him health and prosperity and a better life because He is the Merciful and Beneficent God.