TEHRAN (defapress) – The Arab League called on international human rights organizations and other relevant bodies to secure the release of Palestinian prisoners from Israeli detention centers in the wake of rising cases of infection with the new coronavirus in the occupied territories.
News ID: 80615 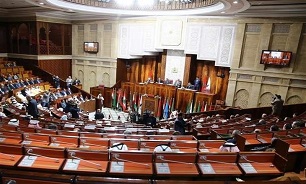 Assistant Secretary-General of the 22-member regional organization, Said Abu Ali, highlighted in a press statement that protection of prisoners is an imperative, especially in times of pandemics such as the current coronavirus crisis across the globe.

He also called on the international community to pressure Israeli authorities for the release of around 5,000 Palestinian prisoners, including hundreds of elderly inmates with health issues, 180 juveniles and 43 women before the number of coronavirus infections in the Israeli-occupied Palestinian lands spirals out of control.

Abu Ali also called for the effective protection and proper safety measures for thousands of Palestinian prisoners inside Israeli jails.

Palestinian prisoners in Israeli detention centers have threatened to go on an open-ended hunger strike in protest at a ban on meeting attorneys, lack of protective measures by guards during searches in their cells, and denial of medical protection gear in the wake of soaring cases of infection with the vitus called COVID-19.

An unnamed source close to Palestinian prisoners told the Israeli English-language Haaretz newspaper that prisoners affiliated with the Islamic resistance movement, Hamas, returned their breakfast and lunch servings on Thursday, while those affiliated with Fatah returned some meals during the weekend. They plan to launch a full hunger strike at the beginning of next month.

“Prisoners are enclosed in their cells,” the source said, adding that Israeli wardens “who deliver food [to Palestinian prisoners] are walking around, handing it out with no gloves or masks….”

Palestinian prisoners have not been tested for the coronavirus, as Israeli Health Ministry regulations in place call for a test only in cases where there exist both exposure to a confirmed patient and symptoms of COVID-19, which include fever, cough, shortness of breath.

Wasfi Kabha said the Israel Prison Service has ordered the inmates to use their socks in place of masks in a blatant disregard for their safety and lives.

“Given the overcrowding in Israeli detention centers and the absence of cleaning products at the prison canteens, Palestinian detainees are now more vulnerable in light of the coronavirus outbreak,” he commented.

Kabha, a former Palestinian Minister of Prisoners' Affairs, further noted that most of the diseases afflicting Palestinian prisoners inside Israeli jails usually result from the lack of healthcare and hygiene supplies.

There is no regular cleaning of the cells, let alone their disinfection, he added.

The former Palestinian minister said there are 1,000 prisoners in Israeli jails with health problems, including 28 suffering from chronic diseases. This means they are at a higher contraction risk.

Kabha called on concerned local and international human rights organizations to pressure Israeli authorities to take all the necessary preventive measures that would ensure the safety of the Palestinian prisoners in the time of the pandemic.

Separately, Israeli police forces have abandoned a Palestinian man suspected to have contracted the novel coronavirus at a checkpoint in the West Bank.

The Palestinian Ma’an news agency posted pictures of a Palestinian worker lying on the ground near a junction close to Kifl Haris village in the northern West Bank, located six kilometers west of Salfit and 18 kilometers south of Nablus, on Tuesday.

The development took place only a day after a Palestinian man displaying symptoms of the coronavirus was abandoned by Israeli police forces.

Witnesses said the man, identified as Malek, went through the Maccabim checkpoint before collapsing onto the ground on Monday.

Malek told the Israeli Haaretz newspaper he was working in the Israeli-occupied territories, and that his employer took him to Ichilov Hospital in Tel Aviv after he felt unwell and developed flu-like symptoms.

The Palestinian man added that a hospital guard reported him to the police and a van came to pick him up.

Israeli officers then handcuffed him and took him to Maccabim checkpoint, where he said they “threw him out.”

Malek said he had fever and other flu symptoms and didn’t have the strength to stand.

Palestinian officials at the checkpoint called him an ambulance, which arrived about half an hour after he had crossed through the checkpoint and collapsed on the ground.

Ma’an news agency posted a video showing Malek lying on the ground, while the Palestinian ambulance arrives to collect him.

Palestinian Authority medical staff later examined Malek, and he was found not to have the coronavirus.