TEHRAN (defapress) – The US overtook China and topped the list of nations with the most coronavirus cases, as the number of the infected within the country crept past 85,000 cases.
News ID: 80633 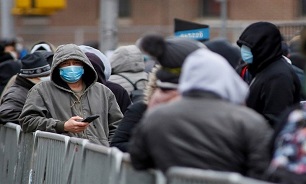 The grim milestone was reached on Thursday, according to data compiled by Johns Hopkins University, which puts the US at 85,840 cases of the virus, surpassing Italy at 80,589 and China at 81,782.

With 150 new fatalities reported so far on Thursday alone, COVID-19 has killed a total of 1,177 Americans to date. Thursday also saw cases worldwide soar beyond half a million, with more than 525,000 infections reported around the globe, RT reported.

US President Donald Trump, when asked about the new tally, said the uptick in cases was “a tribute to our testing,” suggesting ramped up screenings for the virus throughout the country had driven the surge in newly confirmed infections. The president also sounded skepticism over figures provided by China, where the outbreak originated, stating “I'm sure you're not able to tell what China's testing and not testing.”

Though China led the world in infections from December, when the outbreak erupted in the city of Wuhan, till now, the sweeping quarantine measures appeared to pay off and daily tallies fell.

As restrictions grow tighter across American communities, China has gradually lifted its own, allowing some 60 million residents in Hubei province – COVID-19’s first epicenter – to return to work and businesses to reopen this week. An influx of coronavirus cases imported from abroad, however, prompted authorities to temporarily close China’s borders to foreigners on Thursday, also limiting all airlines to a single weekly flight in and out of the country starting this weekend.

Italy has since become the top COVID-19 hot spot, facing one of the world’s highest fatality rates and a wave of patients that overwhelmed the country’s healthcare system. With a population some five times greater than Italy’s, however, the US has rapidly overcome the Mediterranean nation, with major clusters spreading across dozens of states.

Widespread lockdowns and stay-at-home orders have ground large sectors of the US economy to a halt, driving more than 3 million Americans to apply for unemployment benefits, smashing previous records – including at the height of the 2008 financial meltdown. A $2 trillion stimulus package passed by the Senate on Wednesday night looks to alleviate some of the pressure, sending $1,200 checks to anyone earning less than $75,000 annually, providing billions in loan guarantees to small businesses and setting aside funds for expanded testing for the virus, among other measures.