TEHRAN (defapress) – Iran's Ambassador to Belgium Gholam Hossein Dehqani said the US administration will not lift its sanctions against Tehran amid the coronavirus pandemic even if the Islamic Republic makes a direct plea for their removal.
News ID: 80780 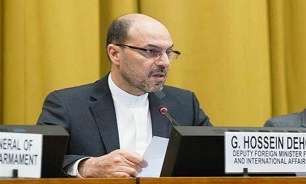 “Is the US government stalling such relief only pending a ‘direct’ request from the Iranian side? Or, could it be a matter of the US administration’s policy within the broader maximum pressure campaign?” Dehqani said in an op-ed published by Euronews on Thursday.

It came after US President Donald Trump recently said he would have a “moral responsibility” to help Iran in its fight against the coronavirus pandemic if leaders of the country asked for assistance.

However, he said, they had not yet asked.

“Well they haven't even asked us to do that,” said Trump, when asked by reporters if the United States would consider easing sanctions on Iran in light of the global outbreak.

Recently, Iran’s Foreign Minister Mohammad Javad Zarif wrote a letter to the United Nations secretary-general, insisting that the illegal sanctions imposed by the Trump administration had greatly hampered the nation’s medics who were selflessly struggling to fight the novel coronavirus pandemic.

Following is the full text of Dehqani’s article:

Should Iran Make A Direct Plea for Sanctions Relief?

Against the backdrop of overwhelming international calls for the easing of sanctions that have obstructed Iran’s humanitarian trade, some US officials have claimed that Iran never asked for sanctions relief.

By this, they probably mean a direct plea to the US government to obtain the relief. They even went so far as to blame the entire international campaign as “Iran’s sanctions relief scam.” Is the US government stalling such relief only pending a “direct” request from the Iranian side? Or, could it be a matter of the US administration’s policy within the broader maximum pressure campaign?

To set the context right, my arguments are along the following lines: first and foremost, as a matter of principle, Iran does not recognize the unilateral sanctions of the United States and deems these unilateral coercive measures illegal and a violation of international law.

Consequently, Iran does not adopt a line of action, the underlying logic for which it does not recognize as valid. Further, it appears the maximum pressure campaign set a maximum expectation for the Trump administration too. The Secretary of State’s remarks to the effect that Iran had to listen to the United States, “if they want[ed] their people to eat” is a stark reminder of such expectation. Also, President Trump’s adamant insistence that Iran call them is as telling an example of this mentality. In this light, they will accept nothing short of Iran’s surrender.

Under such circumstances, even the slightest hint would be interpreted in a maximalist light as Iran’s submission. This maximum expectation will no doubt breed disappointment for the US administration. Smart diplomacy is the sum of the many small steps towards confidence-building; the course of action the US has adopted since 8 May 2018 suggests otherwise.

Secondly, Iran is not alone in rejecting the legitimacy of US sanctions. The European Union, for its part, does not recognize the extraterritorial effects of third-party legislation and forbade the compliance by EU citizens with the extraterritorial effects of certain sanctions that serve the foreign policy objectives of a third country at the expense of the sovereignty of EU member states. Quite recently, the EU “stress[ed] that sanctions should not impede the delivery of essential equipment and supplies necessary to fight the coronavirus and limit its spread worldwide.” In this regard, the EU stands in a good position to prove that it can put its economic interests second to a principled defense of international law.

Last but not the least, COVID-19 is not a national issue; it is not confined to a certain geography, region, nation, culture and so on. It has created a unique moment of global solidarity. The United Nations Secretary-General has called for a global truce in all corners of the world and high-ranking officials of the United Nations have made pleas warning against the ruinous impact of such sanctions on the health systems of the countries that have been stricken by COVID-19, to name but a few. The UN High Commissioner for Human Rights has warned against the collapse of the health system in countries that have been stricken by the virus and are the target of sanctions. Moreover, the UN Special Rapporteur on the negative impacts of Unilateral Coercive Measures, “urged the international community to take immediate measures to lift, or at least suspend, until our common threat is eliminated.” She expressly called upon sanctioning states to immediately withdraw all the measures that erect barriers to trade “including those which prevent financing the purchase of medicine, medical equipment, food, other essential goods.”

In conclusion, Iran’s strong conviction as to the illegality of the unilateral sanctions, the global rejection of these unilateral coercive measures as against international law and as a tool in furtherance of a third country’s foreign policy agenda at the expense of others’ sovereignty, and the international outcry over the humanitarian impact of sanctions on Iran’s ongoing fight against the virus, beg this question: has the deluge of international demands that US sanctions be lifted fallen on deaf ears only so that they could hear it directly from Iran? Or, is it due to the actual tendency among some of the top US officials to make Iran buckle under the mounting pressure that is at play?