Iran can defeat COVID-19 without relying on West

TEHRAN (defapress) – Rear Admiral Habibollah Sayyari said that Iran can defeat the COVID-19 outbreak by relying on its domestic capabilities and past experiences.
News ID: 80798 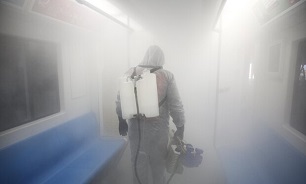 “Regarding confronting coronavirus and other issues, we have no choice but to stand on our own feet … we should not wait for the lifting of sanctions,” Sayyari, Deputy Coordinator of the Islamic Republic of Iran’s Army, told Mehr News Agency on Monday.

He went on laud the country’s production of required materials and equipment for the anti-corona fight such as face masks, disinfectants, ventilators, test kits, and hospital beds in the shortest time possible.

“Nobody helps you without making you feel obligated, so we need to use our past experiences, rely on domestic knowledge and capacity, and believe that we can do it. Be sure that we can defeat the coronavirus.”

The global outbreak of the virus proved that each country is busy solving its own problems, he said, adding, “America, with all its claims of being an advanced country, are pirating masks of other countries and its people are fighting in supermarkets over toilet paper … This shows that the civilization they claim to have is just a fake front.”

“Did the same happen in Iran after the outbreak given the existence of all the sanctions, economic pressures, and hostilities towards the nation? Absolutely not,” he added.

Iranian people are following humanity and sacrificing their lives despite going through hard days, he said, noting that this shows “the Iranian nation’s cultural identity.”

Iran is under illegal sanctions of the United States after the Trump administration withdrew from the JCPOA in May 2018. Despite calls from the international community to lift the unilateral sanctions amid the outbreak, Washington has refused to do so and has even reportedly blocked Iran’s request for a $5 billion emergency funds from IMF. Foreign Minister Zarif described the US efforts as ‘medical terrorism’.

Meanwhile, Iran, which is one of the hardest-hit by the virus with over 71,000 infections as of Sunday, has mobilized domestic capacities to fight the outbreak by producing the required equipment.