TEHRAN (defapress)- Over 11,000 Iranian Army medical personnel are in the frontline of combat against coronavirus disease, Army Commander Brigadier-General Abdolrahim Mousavi said in a message on Wednesday.
News ID: 80820 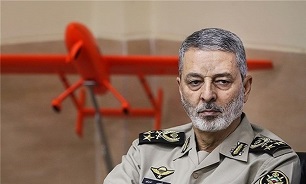 General Mousavi’s message was released on the occasion of National Army Day.

“I am grateful of all sincere efforts of the Iranian Army forces specially those made by the medical personnel who are endeavoring to save the lives of the people during the disease,” Mousavi said.

He wished health and prosperity for the Army forces and their families on this special occasion.

The Iranian health ministry announced on Wednesday that 94 Coronavirus patients have died in the country in the last one day after a month that the country was losing over a hundred patients each day.

“1,512 more patients infected with COVID-19 virus have been identified in the country since yesterday based on confirmed diagnosis criteria,” Jahanpour said.

He said that the total number of coronavirus patients in Iran has increased to 76,389, adding that 4,777 people have lost their lives due to infection to the virus, including 94 in the past 24 hours.

Jahanpour, meantime, said that 49,933 infected people have been treated and dismissed from hospital, adding that the recovery of patients has sped up in Iran.

He noted that 299,204 coronavirus diagnosis tests have been carried out in the country so far, expressing concern that 3,643 patients infected with COVID-19 virus are in critical conditions.

The coronavirus COVID-19 is affecting approximately all countries and territories around the world. The virus was first reported in the central Chinese city of Wuhan late last year. It has so far killed more than 120,400 people and infected over 1.93 million others globally.