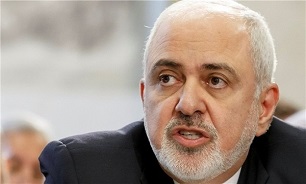 Trump claimed on Saturday that he would be willing to send ventilators to Iran to help treat coronavirus patients as most hospitals in the US continue to complain about an acute shortage of ventilators, among other medical tools and equipment, in combat against the deadly coronavirus that has already claimed the lives of more than 34,000 Americans.

In response to Trump, Zarif wrote on his twitter page on Sunday that “Iran will be exporting ventilators in a few months”.

Trump had also claimed that “Iran is a much different country (now) than when I came. Iran was going to take over the entire Middle East. Right now, they just want to survive. They’re having protests every week. They’re loaded up with the plague”.

Zarif condemned the US president's interfering remarks, and said, “All you need to do is stop interfering in the affairs of other nations; mine especially. And believe me, we do not take advice from any American politician.”

As coronavirus fatalities and death toll in the US are still on the increase, Iran continues to witness a meaningful fall in the number of victims with the Iranian health ministry announcing on Sunday that 87 patients infected with COVID-19 virus have lost their lives in the past 24 hours.

“1,343 more patients infected with COVID-19 virus have been identified in the country since yesterday based on confirmed diagnosis criteria,” Health Ministry Spokesman Kianoush Jahanpour said on Sunday.

He said that the total number of coronavirus patients in Iran has increased to 82,211, adding that 5,118 people have lost their lives due to infection to the virus, including 87 in the past 24 hours.

Jahanpour, meantime, said that 57,023 infected people have been treated and dismissed from hospitals, expressing concern that 3,456 patients infected with COVID-19 virus are in critical conditions.

He also noted that 341,662 coronavirus diagnosis tests have been carried out in the country so far.

The coronavirus COVID-19 is affecting approximately all countries and territories around the world. The virus was first reported in the central Chinese city of Wuhan late last year. It has so far killed more than 161,100 people and infected over 2.34 million others globally.