TEHRAN (defapress)- Commander of the Islamic Revolution Guards Corps (IRGC) Major General Hossein Salami warned the US forces against any act of sabotage to threatening move in the Persian Gulf, after US President Donald Trump’s provocative remarks.
News ID: 80892 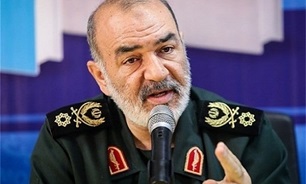