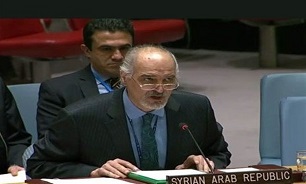 Speaking at a United Nations Security Council (UNSC) session on the situation in Syria via a video link on Wednesday, Bashar al-Ja’afari said Ankara had deployed medium-range surface-to-air MIM-23 Hawk missiles to Idlib.

“The Turkish regime didn’t stop at violating its obligations according to the understandings of Astana, Sochi and Moscow, and supporting the terrorist organizations, but it reinforced its illegitimate military presence on the Syrian territories through bringing in convoys loaded with weapons and heavy equipment every day,” said Ja’afari.

He called on the 15-member UN body to oblige Ankara and other states that sponsor terrorist groups in Syria to end such support and instead help Damascus in its counter-terrorism efforts in order to complete the reconstruction process in the Arab country.

The Syrian diplomat added that any foreign military presence in Syria without authorization from the government in Damascus amounts to aggression and occupation.

He further urged the UN to support the Syrian government in its efforts to complete the reconstruction process, eradicate terrorist groups and reach a political solution to the ongoing conflict without any foreign meddling.

Syria is determined to adhere to its sovereignty and territorial integrity and will not abandon its firm resolve to liberate its occupied territories whether the occupiers are Americans, Turks, Israelis or terrorist organizations, stressed Ja’afari.

Ankara has recently beefed up its military presence in the militant-held Syrian region despite a ceasefire reached last month to halt an escalation.

On March 5, Russia and Turkey, which support opposite sides in the Syrian conflict, came to an agreement on the ceasefire regime in Idlib, where Turkish aggression against the Syrian government had earlier risked starting a war.

The ceasefire came a few months after the Syrian army launched an anti-terror operation against foreign-sponsored militants after they failed to honor a de-escalation agreement between Ankara and Moscow.

Ankara, which itself supports a number of anti-Damascus militant outfits in Idlib, claims that Syrian offensives there have killed dozens of its troops. It has threatened to attack the Syrian military unless government forces abandoned the liberated areas, and asked Moscow to “stop” Damascus.

Turkey has, meanwhile, sent thousands of troops and heavy military hardware into Idlib in an unprecedented incursion to back the militants.

Damascus, though, has vowed to liberate entire Syria, including Idlib, which remains the last major bastion for foreign-backed Takfiri terrorists in the country.