TEHRAN (defapress) – German Foreign Minister Heiko Maas said in a newspaper interview on Saturday there was a growing risk of a hard Brexit in the midst of the coronavirus crisis as negotiations between Britain and the EU so far on the future trade relationship had yielded hardly any progress.
News ID: 81052 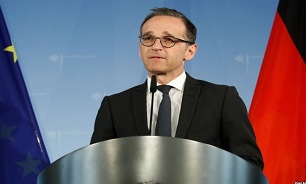 Britain left the EU in January, and talks with the bloc are now focused on setting new trading terms from 2021, when London’s status-quo transition period ends. However the talks quickly hit an impasse when negotiations resumed last month, according to diplomats and officials.

“It’s worrying that Britain is moving further away from our jointly agreed political declaration on key issues in the negotiations,” Maas told Augsburger Allgemeine newspaper.

“It’s simply not on, because the negotiations are a complete package as it’s laid out in the political declaration,” he added, Reuters reported.

Maas said there was currently neither common ground on how to shape a comprehensive trade deal nor on whether to extend the negotiation period beyond the end of the year.

“The British government is still refusing to extend the deadline,” Maas said. “If it stays that way, we will have to deal with Brexit in addition to the coronavirus at the turn of the year.”

Irish Foreign Minister Simon Coveney said on Friday the coronavirus pandemic had made an already difficult timeline for a British-European Union trade deal “virtually impossible” and that it would make sense to seek more time.