TEHRAN (FNA)- Turkey will consider elements of Libyan warlord Khalifa Haftar as a legitimate target if the country’s interests in Libya are targeted, the Turkish Foreign Ministry said on Sunday.
News ID: 81073 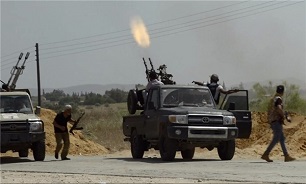 Haftar’s attacks which targeted diplomatic missions, including the Turkish Embassy in Tripoli, the Mitiga Airport, civilian airplanes preparing to take off, and other civilian infrastructure constituted a war crime, the ministry said in a statement, Anadolu news agency reported.

Underlining that Haftar's militia indiscriminately increased its attacks, particularly in the capital Tripoli, the ministry said it is unacceptable for the UN to remain inactive in the face of atrocity in the country.

The countries which provide military, financial and political support to Haftar are also responsible for the cruelty and instability in the country, it added.

It stressed Turkey will continue to support the legitimate government and its institutions in Libya.

On Saturday, at least six civilians were killed in rocket attacks by Haftar's militia on the Mitiga International Airport in the capital Tripoli.

Saturday's attacks came hours after the UN Support Mission in Libya (UNSMIL) condemned the indiscriminate attacks on civilians in Tripoli, saying the attacks "may amount to war crimes".

Haftar, the leader of illegal armed forces in Eastern Libya, intensified attacks on civilians since the beginning of May as the Libyan government army recently gained the advantage and inflicted severe losses on his militants.

The government has been under attack by Haftar's forces since April 2019, with more than 1,000 killed in the violence. It launched Operation Peace Storm on March 26 to counter attacks on the capital.

Following the ouster of late ruler Muammar Gaddafi in 2011, Libya's government was founded in 2015 under a UN-led political deal.