TEHRAN (defapress) – Russia's Permanent Representative to the United Nations says the US efforts to retain rights of partnership in the 2015 nuclear deal, also known as the Joint Comprehensive Plan of Action, are groundless since Washington has already withdrawn from the pact.
News ID: 81141 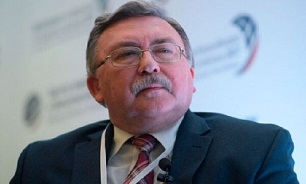 Mikhail Ulyanov also lambasted Washington for struggling to renew Iran’s UN arms embargo, which is set to end in October, saying “If the US is a JCPOA participant, it cannot question current provisions on arms embargo.”

He made the comments in a series of tweets early on Monday.

In another tweet, he wrote, “US hopes to retain rights of a JCPOA participant. Groundless. Not only because of withdrawal from Iran Deal. According to Annex B of res.2231 participation of China, France, Germany, RF, UK and US in JCPOA is contingent upon compliance with “sunset” provisions, incl. arms embargo.”

He added, “In other words, those who don’t comply with sunset provisions of Annex B of resolution 2231 cannot be recognized to be as JCPOA participant by definition. This is dispute-ending point forever.”

Two years after the United States withdrew from the Iran nuclear deal, the Trump administration is looking to extend a UN ban on conventional arms sales to and from Iran, a strategy designed to kill the deal for good.

In a May 9 statement marking the second anniversary of the Donald Trump administration’s withdrawal from the Iran nuclear deal, U.S. Secretary of State Mike Pompeo pledged to “exercise all diplomatic options” to extend the UN ban on conventional arms sales to and from Iran beyond its current expiry date on October 18.

Russia has leveled criticism against the US for trying to kill the deal.