TEHRAN (defapress) – The Speaker of Iran's Parliament Ali Larijani said on Monday that the Zionist regime is disturbing the region by its hostile activities and Majlis has accordingly approved a motion which obliges the government to take certain measures against hostile moves of the Israeli regime.
News ID: 81142 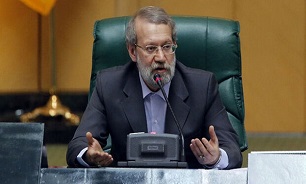 "The approval of this plan was very important in the current situation because the Zionist regime is carrying out hostile behaviors and actions in the region," Larijani said, "The regime is disrupting the situation in the region, and therefore it was necessary for this plan to be approved."

Last week, the Parliament approved a double-urgency motion that outlines the manner of confrontation on the national and international scale against the Israeli regime. The document was then revised and approved in the Parliament's National Security and Foreign Policy Commission before being endorsed by lawmakers today at the open session of the Parliament. The motion includes 16 articles.

The motion prohibits any direct or indirect cooperation with real or legal persons from the Zionist regime in exhibitions, conferences, and gatherings.

Any cooperation or espionage in favor of the Zionist regime will be considered as Muharebeh (waging war against God) and corruption.

Accordingly, it is forbidden for Iranian citizens to travel to the occupied Palestinian territories, in addition, all Zionists are prohibited from entering the Islamic Republic.