TEHRAN (defapress) – Iranian Defense Minister Brigadier General Amir Hatami warned the enemies that any threat to the country’s national interests and security will draw a rapid and crushing response, making a reference to the January missile attack on the US airbase of Ain al-Assad in Iraq.
News ID: 81147 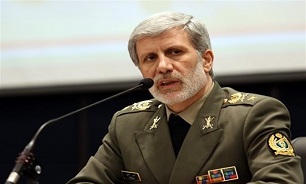 In remarks at a joint meeting of the Defense Ministry and the Iranian Parliament’s National Security and Foreign Policy Commission on Monday, General Hatami made it clear for the adversaries that any act of aggression against Iran’s national interests and security will receive a rapid, decisive and crushing response from the Islamic Republic.

The Iranian Armed Forces have already proved the military decisiveness and timely response to the global arrogance and hegemony, the minister said, citing the missile strike that Iran launched on January 8 on a strategic US airbase in Iraq in retaliation for the assassination of top Iranian commander Lt. General Qassem Soleimani.

Brigadier General Hatami also commended the Iranian Parliament for its widespread support for the Defense Ministry and its plans for boosting the country’s defense power.

Describing Iran’s major advances in various military spheres, such as ground, aerial and naval combat, electronic and aerospace industries, and missile capabilities as a thorn in the side of the enemies, the general said the Defense Ministry’s qualitative and quantitative capabilities have grown by several times during the first two years of the current administration’s term.

He added that the Iranian Armed Forces have turned threats into opportunities and made great advances over the past four decades by relying on domestic capacities.

Brigadier General Hatami also highlighted the Defense Ministry’s contribution to the coronavirus response immediately after the outbreak of the contagious disease in Iran, stressing that the world has acknowledged Iran’s national unity and mobilization in dealing with the virus in spite of the severe sanctions.

The military forces of Iran have played a significant role in the fight against the coronavirus by disinfecting public places, screening people, producing various medical supplies, setting up hospitals and convalescent homes and providing a range of health services.

Chief of Staff of the Iranian Armed Forces Major General Mohammad Hossein Baqeri has said that the military forces will spare no efforts to help the medical staff and will stand by the country’s health society in protecting the lives of people.