TEHRAN (defapress) – European Union High Representative Josep Borrell said the 27-member bloc will not recognize any changes to the 1967 borders as amid the Tel Aviv regime’s attempts to annex parts of the occupied Palestinian territory.
News ID: 81150 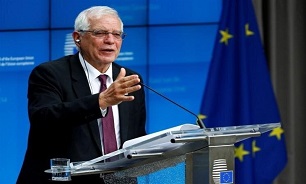 “International law is a fundamental pillar of the international rules-based order. In this respect, the EU and its Member States recall that they will not recognize any changes to the 1967 borders unless agreed by Israelis and Palestinians. The two-state solution, with Jerusalem as the future capital for both States, is the only way to ensure sustainable peace and stability in the region,” Borrell said in a statement on Monday, WAFA news agency reported.

“We strongly urge Israel to refrain from any unilateral decision that would lead to the annexation of any occupied Palestinian territory and would be, as such, contrary to International Law,” he said.

Elsewhere in his statement, Borrell expressed the EU’s willingness to help restart Israeli-Palestinian talks, adding that “the two-state solution, with Jerusalem (al-Quds) as the future capital for both states, is the only way to ensure sustainable peace and stability in the region.”