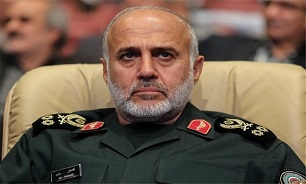 In the gathering with senior commanders of the Iranian Armed Forces in Tehran, held to assess military threats to Iran, Commander of the Khatam al-Anbia Headquarters Major General Gholam Ali Rashid stressed the need to enhance the country’s defense power and deterrence capabilities.

Emphasizing the importance of supplying the Armed Forces’ demands to keep them fit to counter military and security threats, Major General Rashid praised the outgoing speaker of the Iranian Parliament, Ali Larijani, for his prominent role in supporting Iranian military units.

During Larijani’s tenure, the Parliament provided decent support for the Armed Forces and the axis of resistance, the general added.

In January, the Iranian lawmakers unanimously voted for a motion to designate the US Army and the Pentagon as terrorist organizations in response to the American assassinate Iran’s revered commander, Lt. General Qassem Soleimani.

The Parliament also assigned the administration to provide the IRGC Quds Force with €200 million via the National Development Fund to strengthen the defense power of the forces.