TEHRAN (defapress) – Secretary of Iran's Supreme National Security Council Ali Shamkhani paid tribute to the crew of the oil tankers that have carried fuel to Venezuela for humiliating the US sanctions in the global arena.
News ID: 81207 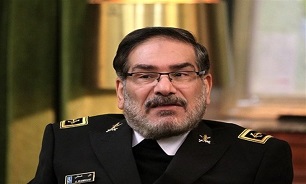 In a message on his Twitter account, Shamkhani said the flag of Iran continues to be raised in the world thanks to the endeavors and mettlesome action by the Iranians that have devoted themselves to serving the country and are not afraid of the enemies.

Commending the national “heroes” for their courage and devotion to duty, he said such sacrifices are made in various methods, once in the military fronts to defend the country during the Sacred Defense in the 1980s, once in the fight against the novel coronavirus, and once in the “global arena of humiliation of sanctions on the deck of oil tankers.”

Shamkhani was referring to five Iranian oil tankers that have transferred gasoline to Venezuela in defiance of the US sanctions.