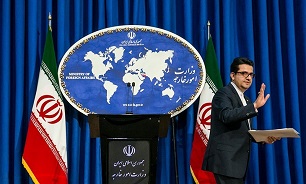 "We do shatter your max pressure campaign with maximum resistance, stiffening resolve and reliance on the national capabilities,” the Iranian spokesman said in a post on his Twitter account on Thursday, responding to recent remark by US Special Representative for Iran Brian Hook.

“It is you who face a choice: either admit defeat and start respecting the Iranian Nation or further keep being hated, humiliating and isolating yourselves,” Mousavi added.

His comments came after Brian Hook claimed that US President Donald Trump’s “maximum pressure” policy is giving Iran a choice between negotiating with the US or managing what he called “economic collapse” caused by US sanctions.

“Because of our pressure, Iran’s leaders are facing a decision: Either negotiate with us or manage economic collapse,” Hook told reporters during a conference call, Press TV reported.