TEHRAN (defapress) – Chief of Staff of the Iranian Armed Forces warned the enemies that a miscalculation in dealing with Iran will trigger a decisive and immediate response from the country’s military forces.
News ID: 81222 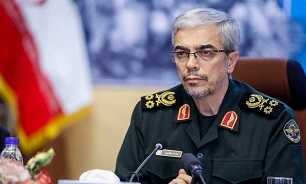 In a statement on the occasion of the anniversary of passing away of Imam Khomeini, Major General Mohammad Hossein Baqeri said the Iranian Armed Forces are fully prepared to counter threats and respond to hostile measures.

Under the guidance of Leader of the Islamic Revolution Ayatollah Seyed Ali Khamenei, the Armed Forces are sticking to a strategy to “boost deterrent power, maximize defense capacities, and update the offense tactics proportional to potential threats posed by the front of enemies,” the senior commander added.

Major General Baqeri further gave an assurance that Iran’s military forces remain vigilant at all times to deal with the modern seditions and plots against the Islamic Republic. “As we have announced several times, we will decisively and immediately give retaliatory response to any miscalculation from them (enemies) at any place and any time.”

He also highlighted the failure of the “front of hegemony, Zionism, and the filthy regional reactionary” regimes to harm the Islamic Republic and the Revolution during three decades after passing away of Imam Khomeini, saying their full-blown media wars, cultural onslaught, economic threats and wars, military threats, and psychological warfare against Iran have all ended in failure.

The top commander then pointed to Iran’s strategy of “active and progressive resistance, not stationary and passive resistance”, saying such an approach has led to the formation of resistance groups in the Islamic world and the victory of resistance front in West Asia.

Major General Baqeri went on to say that the active resistance has defeated the Daesh (ISIL or ISIS) terrorist group and Takfiri terrorism, thwarted the evil plots of the “Greater Middle East” and the “Deal of the Century”, and has turned the US withdrawal from the region into a regional and international demand.