TEHRAN (defapress) - Protesters in New York City gathered to demonstrate against the death of George Floyd for the 15th consecutive day on Thursday, leaving a trail of red paint on 5th Avenue to symbolize blood of black people on the streets.
News ID: 81306 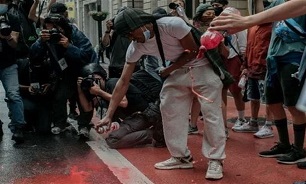 At least one of the protesters had a sign that read “The NYPD has blood on its hands,” according to the New York Post.

At least one protester was arrested during the march for spray painting the letters “BLM,” which stand for Black Lives Matter, on a traffic sign. Others spilled cans of bright red paints on the streets as they marched from Harlem to Midtown Manhattan.

The protesters, who were demanding an end of police brutality in the wake of the death of Floyd, chanted the names of black people killed in encounters with the police.

Floyd’s May 25 death in the custody of Minneapolis police has sparked massive protests in dozens of US cities as demonstrators demand police reform and the defunding of police departments.

Floyd died after a former police officer pinned him down with a knee on Floyd's neck for over eight minutes until his body became unrepsonsive. Floyd was pronounced dead 90 minutes after he was arrested.