TEHRAN (defapress) – US Secretary-General Antonio Guterres took the Saudi-led coalition waging war on Yemen off a global blacklist of parties whose actions have harmed children in conflict, a move that drew immediate protests from human rights groups.
News ID: 81335 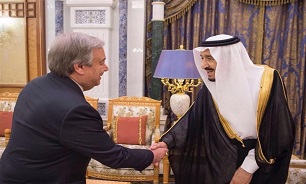 The UN chief’s annual report to the Security Council on Children and Armed Conflict released Monday removed the coalition from a relatively new list of government forces and armed groups “that have put in place measures ... aimed at improving the protection of children,” despite his finding that the coalition was responsible for the killing and maiming of 222 children last year including 171 from airstrikes.

The report was issued as the Houthi Ansarullah movement reported that an airstrike from the Saudi-led coalition struck a vehicle carrying civilians in northern Yemen on Monday, killing 13 people, including four children.

Virginia Gamba, the UN special representative for children in armed conflict, told a news conference launching the report that the secretary-general made the decision to remove the Saudis from the “blacklist” following “the sustained, significant decrease in killing and maiming due to airstrikes.”

Jo Becker, Human Rights Watch’s children’s rights advocacy director, accused the secretary-general of adding a new level of shame to his ‘list of shame’ by removing the Saudi-led coalition and ignoring the UN’s own evidence of continued grave violations against children.”

Adrianne Lapar, director of Watchlist on Children and Armed Conflict, an international advocacy group, said that by removing the Saudi-led coalition, which also includes the United Arab Emirates, “the secretary-general sends the message that powerful actors can get away with killing children.”

She called for an independent and transparent assessment of the process of de-listing the coalition, “to ensure that all violators are held to the same standard, no matter who they or their friends are.” Gamba replied in response to a question on whether Saudi Arabia offered the UN any incentives to get off the list, “absolutely not.”

Saudi Arabia and a number of its regional allies launched the devastating war on Yemen in March 2015 in order to bring former president Abd Rabbuh Mansour Hadi back to power and crush the Houthi Ansarullah movement.