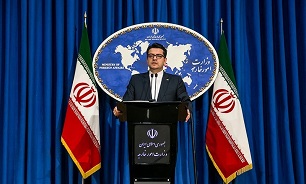 Foreign Ministry Spokesman Abbas Mousavi on Friday told reporters that Iran is awaiting an official report on the cause of the incident, and requests Romanian officials to announce the exact cause of his death.

"He had recently visited the Iranian embassy and had consultations on the quality of his return to Iran," Mousavi said.

"He was later arrested by Romania’s Interpol as he was wanted by the Iranian Judiciary through the International Criminal Police Organization," he noted.

Accordingly, the spokesman added, Iran urges the officials and police of Romania to fulfill their legal duties and prepare an official report on the quality and exact cause of the incident.

The Iranian judge charged with bribery and corruption was arrested by the Interpol in Romania earlier this month and was planned to be handed over to the Islamic Republic once COVID-19 restrictions are lifted.

The fugitive judge was  accused of corruption and taking more than $500,000 in bribes.