Over 70% of Aircraft Parts Made in Iran 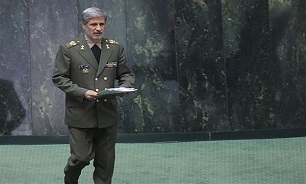 In an address to the Parliament on Tuesday, General Hatami said Iran has attained self-sufficiency in producing many aircraft components, MP Abolfazl Abutorabi told Tasnim.

The defense minister said that local technicians are manufacturing more than 70 percent of the airplane and helicopter components inside the country, in such a way that Iran is not reliant on foreigners any more, the lawmaker added.

Although Iran was not a manufacturer of planes and choppers and despite the large variety of aircraft, the Islamic Republic has managed to manufacture the components for repair and overhaul of the aircraft, Abutorabi quoted the minister as saying.

The MP also noted that General Hatami gave an assurance that Iran is in perfect conditions in terms of defense capabilities and dismissed concerns about the defense industry.

In February 2018, Leader of the Islamic Revolution Ayatollah Seyed Ali Khamenei called for efforts to maintain and boost Iran’s defense capabilities, hitting back at the enemies for disputing the country’s missile program.