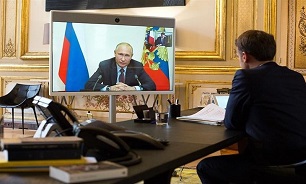 "The profound and meaningful exchange of opinions allowed to continue the dialogue on confidence-building and security, launched during the Russian president’s visit to France one year ago," the Elysee Palace said in a statement, TASS reported.

"Macron stressed his commitment to this dialogue, which became particularly important due to the pandemic," it added.

"The two heads of state welcomed the work, launched within the framework of this dialogue, despite difficulties created by the epidemiological situation," it said. "They noted that a number of working groups was established to achieve concrete results, including on issues of strategic stability and security on the European continent, on sovereignty and arms control."

The two presidents also agreed to continue their effort aimed at "convoking a summit of the five permanent members of the UN Security Council in order to enhance the unity and cohesion within this body of global importance."

Macron and Putin also "agreed to preserve the positive dynamics in cooperation and to boost in the domains of healthcare, environmental protection, biodiversity and culture."

"The leaders of Russia and France confirmed their commitment to the dialogue between the civil societies," the Elysee Palace said.