TEHRAN (defapress)- Special Advisor to Iran's Parliament Speaker for International Affairs Hossein Amir Abdollahian said that his country will overcome illegal US sanctions, adding that the EU had better not take the chance of economic ties with Tehran.
News ID: 81429 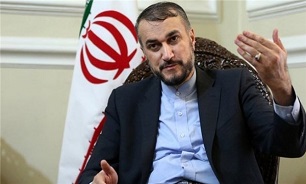 Amir Abdollhian made the remarks on Thursday in a meeting with the Italian envoy to Iran Giuseppe Perrone.

Definitely, we will overcome the new [US] sanctions powerfully and relying on the huge potentials of the country and the great Iranian nation, but Europe must find ways not to lose chance of active economic cooperation with Iran, he stressed.

Unfortunately, Europe's fear of US unilateralism has resulted in the loss of golden opportunities for economic cooperation with Iran, the official said.

While scaring Europe against trade with Iranians by deliberately violating international law, US President Donald is begging for negotiation and dealing with Iran, the speaker’s aide noted.

Describing the destructive conduct of US, Israel and Saudi Arabia as a source of regional tension and instability, Amir Abdollahian said that the US’ blatant support for terrorist groups and interference in regional affairs have aggravated the crisis.

Italian envoy, for his part, said that Rome is determined to preserve coherent, historic and deep-rooted relations with Iran.

Perrone also praised Tehran's role in fighting terrorism in the region and highlighted significance of continued cooperation between the two countries.