TEHRAN (defapress) – Iranian President’s Chief of Staff Mahmoud Vaezi said that strategic cooperation between the Islamic Republic of Iran and the People’s Republic of China is in interests of the two countries.
News ID: 81489 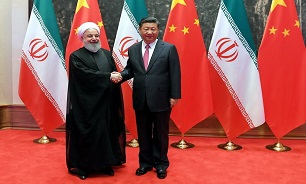 "Iran-China  Strategic Partnership Programme is based on equal footing and shared views and is instituted with the aim of protecting multilateralism," he tweeted on Wednesday in English.

He went on write that the agreement "presents a vision of the relations between the two countries in various areas and serves both countries’ strategic interests."

In another tweet in Persian he added that the program outlines mid- and long-term relations between the two countries in various fields.

Earlier on Wednesday when speaking to reporters on the sidelines of the cabinet session, he said that signing strategic documents to define the future roadmap for relations between countries is a common move, he said, adding, “unfortunately, a destructive propaganda line has been kicked off and guided from outside Iran against the expansion of Iran’s relations with neighbors especially China and Russia as two permanent members of the United Nations Security Council.”