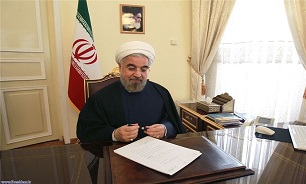 In a message to his Nicaraguan counterpart Jose Daniel Ortega Saavedra on Sunday, Rouhani congratulated the Latin American nation and government on the 41st anniversary of victory of the Sandinista Revolution.

“Highlighting the Islamic Republic of Iran’s great interest in the enhancement of relations with the Republic of Nicaragua and the fulfillment of the interests of people of the two friendly and brotherly nations, I hope we continue to witness the promotion of bilateral cooperation with mutual efforts,” the Iranian president added.

Every year on July 19, people of Nicaragua gather at Plaza La Fe in capital Managua to commemorate the fall of the militarized Somaza family dictatorship. This family ruled the country in a harsh and unscrupulous way for more than four decades. The dynasty was overthrown after the National Sandinista Revolution, which took place when people from all sectors – workers, businessmen, peasants, students, and guerrillas – joined forces and finally defeated the Somoza dynasty and the National Guard on July 19, 1979.

The symbol and direct precedent of the revolution is the struggle of General Augusto C. Sandino (1895-1934), a national hero who fought with bravery, supported by an army formed by farmers and workers.